The many centuries of mutual connections between the Slavic, Ugro-Finnic and Germanic peoples in the Pannonian and Danube Basin regions have led to the joint life of numerous ethnic groups on the territory of present day Vojvodina – Serbs, Hungarians, Slovaks, Rumanians, Ruthenians, Croats, Germans and others. In their historical development all these peoples have preserved their specific features, customs, folk costumes and the like.

The items exhibited in the permanent collection speak in a picturesque and convincing way about man in the Vojvodina region, his natural, cultural and social development during the 19th and 20th century. Starting out from the fact that national culture is created over the centuries and under various cultural influences, the collection is focused on those elements which are the essence of national cultures in Vojvodina: national architecture, agriculture, weaving, carpets, interior design, customs and folk costumes.

The planned development and shaping of the Vojvodina village from the scattered to the straight street type, was required by administrative regulations and was prominent during the period of Habsburg resettlement. For a better understanding of the subject, plans are exhibited on the straight street ordering of villages and towns and plans of houses, along with tools for thatched roofs, facade decorations and their moulds. The most prominent element of the exhibition is part of the entrance and front porch of a house from the early 19th century found in the Srem region.

The natural locality of the Vojvodina plain offered great possibilities for the development of agriculture, stock raising and fishing.

On display there are tools for digging, sowing and the harvest of crops, parts of clothing of shepherds, shepherd tools and horse equipment. A prominent place is given to a wooden plough with a yoke dating from the 19th century. 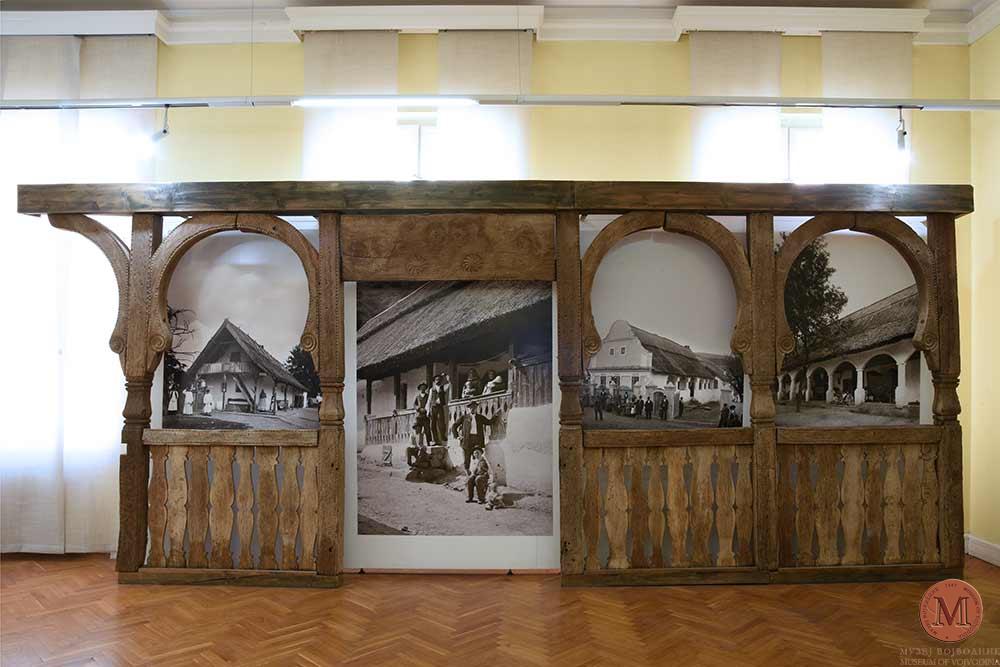 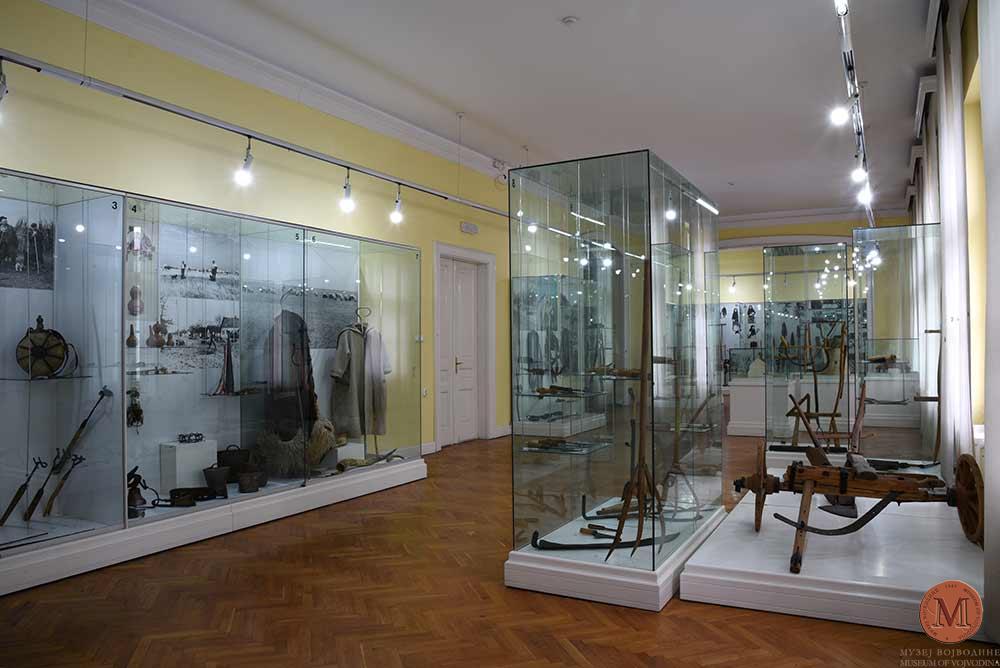 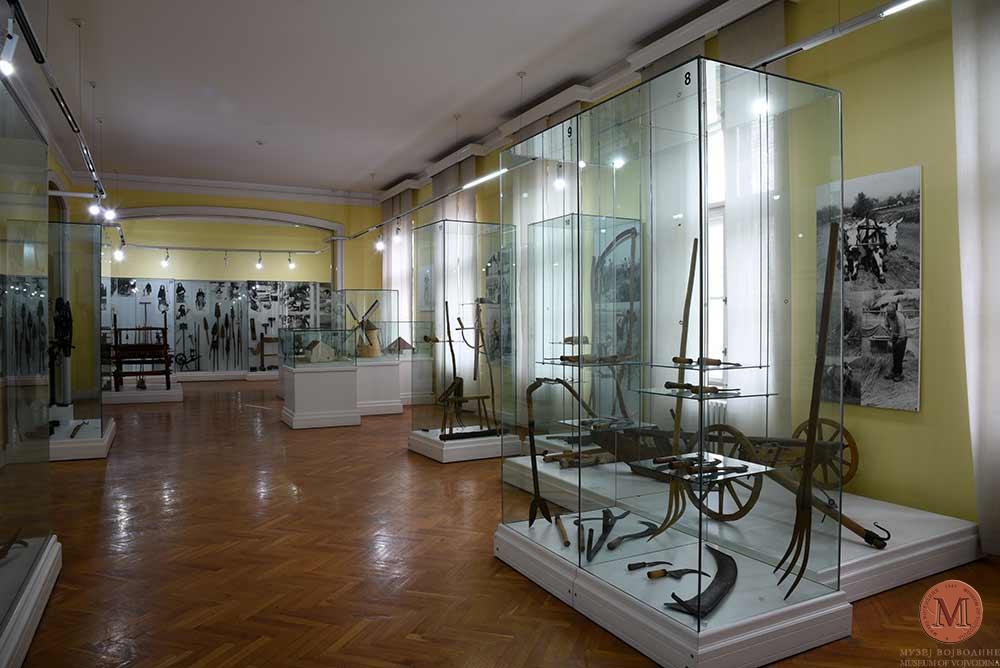 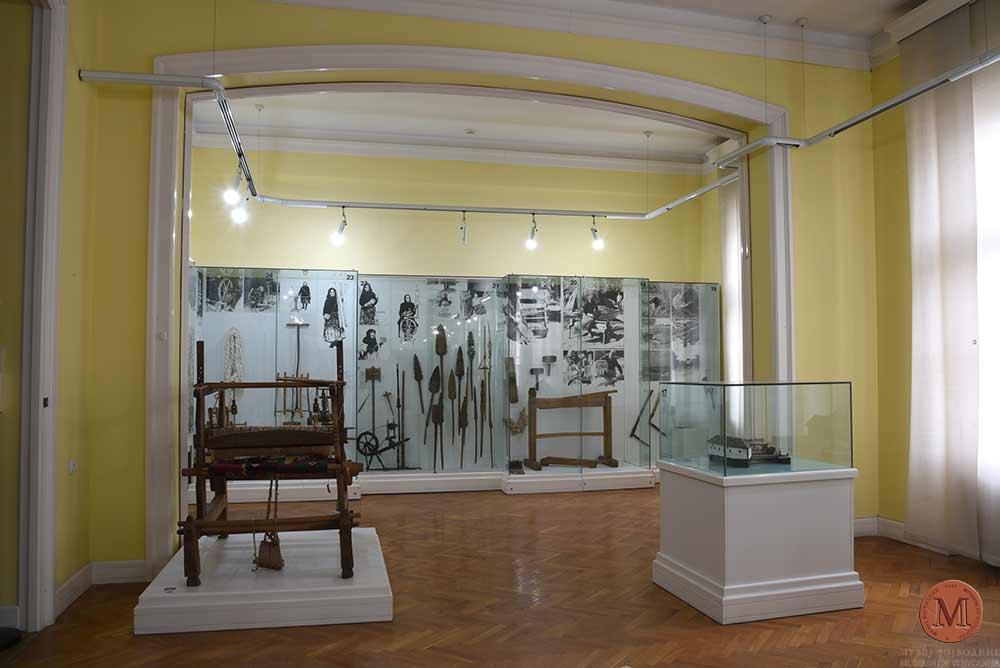 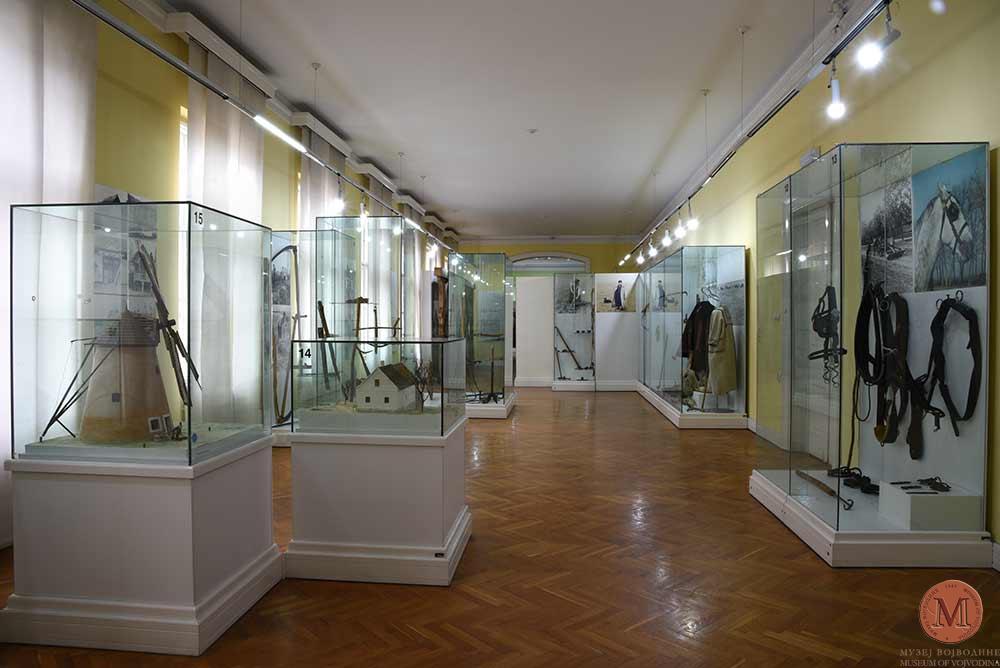 The family needs for textiles were mainly met within the household, so that weaving was exceptionally developed among Serb, Rumanian and Šokac women. At the same time there was a developed cottage weaving industry among the Slovaks and Hungarians. An exhibition follows the process of weaving from the preparation of the yarn to the finished products. Also on display are tools used: shearing scissors, wool combs, distaffs, spinning wheels and the like. In order to point out the importance of weaving for the family, on exhibition there is also a loom from the village of Stapar which was considered one of the largest centres of cottage weaving industry. The beauty of the carpets, the selection of ornaments and colours are evident to the visitor from the exhibited items dating to the 19th century which were woven in the traditional techniques, spun and bobbined.

The interior design of the village home in Vojvodina was crucially linked to the wealth of the owner, along with his ethnic and religious background. Namely, the development of the tree room house – room, kitchen, pantry, into room – kitchen – room, required money for adaptation, while the arrangement and function of the existing furniture remained the same.

In order to give a more complete picture of the interior design, on display is furniture for keeping clothes, for sleeping and sitting, bed linen and bed clothes, lighting utensils and icons painted on glass. The traditional kitchen is depicted by archaic exhibits of pots made out of ceramics, metal and wood, while a special place is devoted to utensils for making and baking bread. 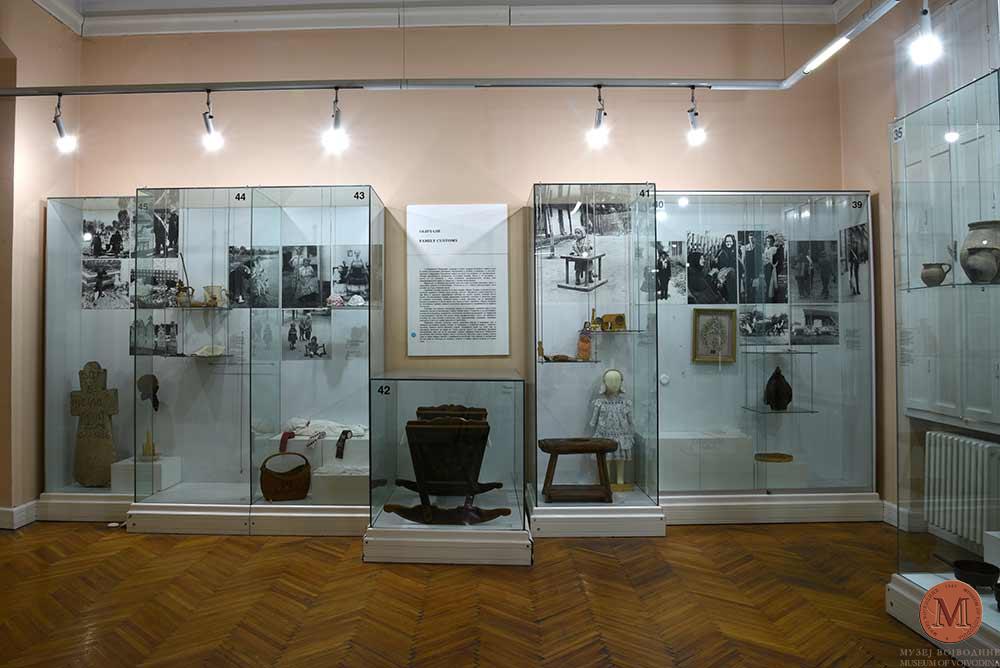 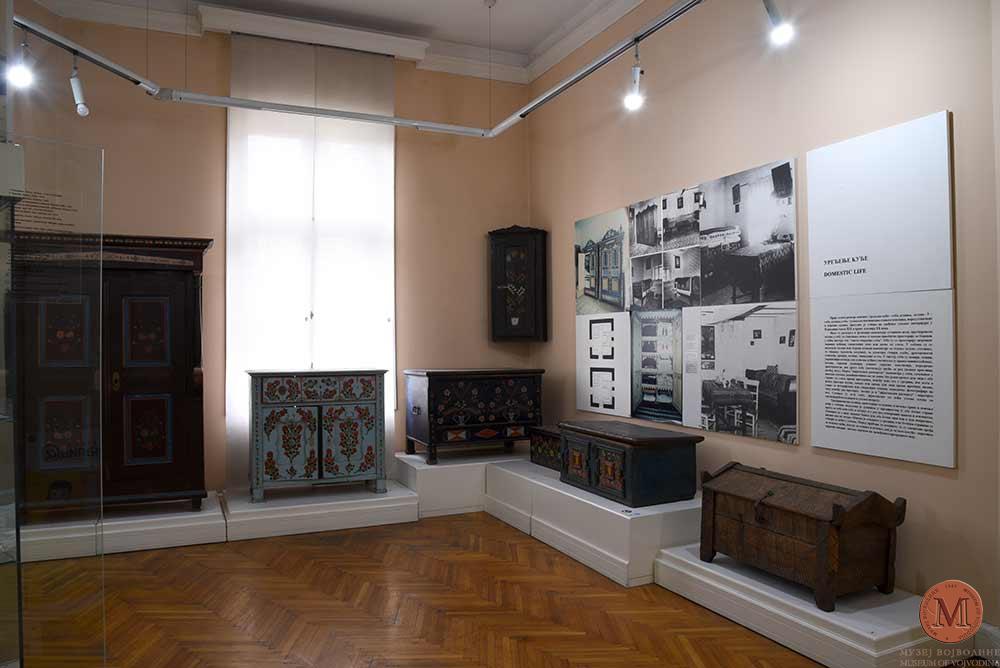 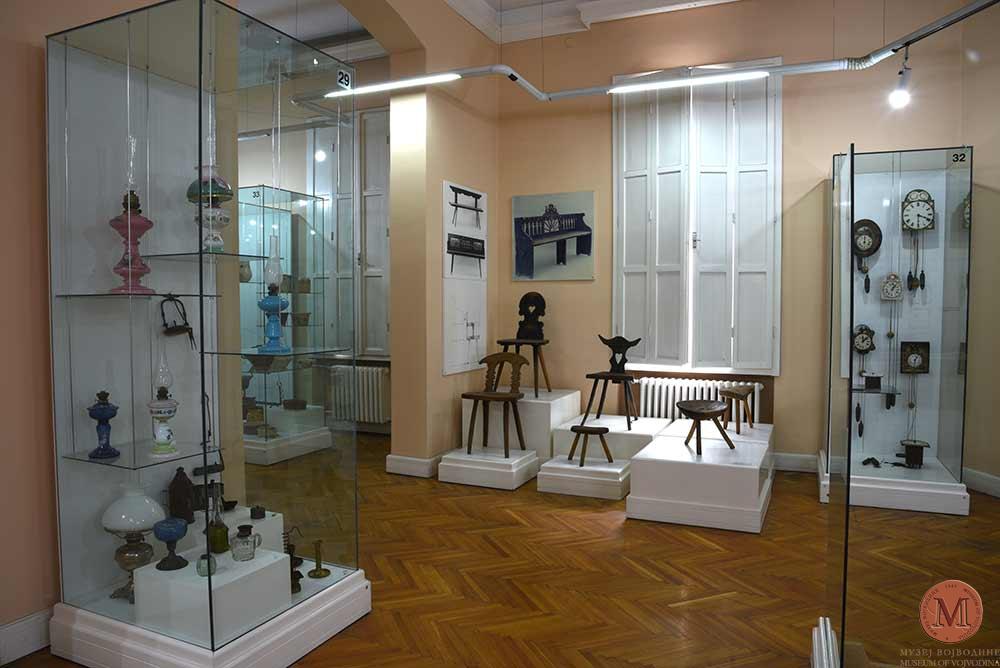 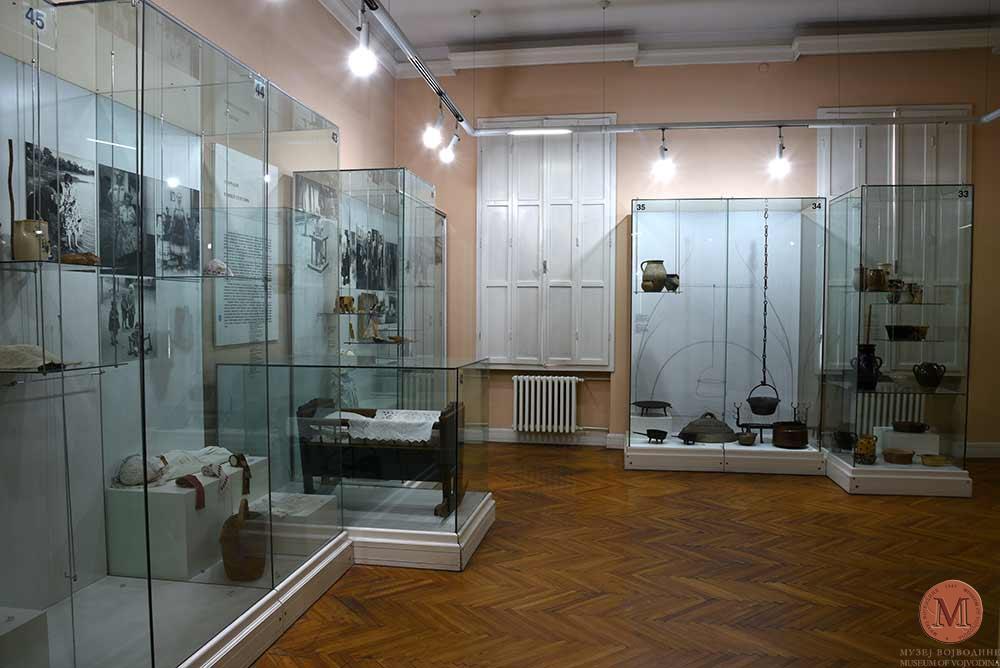 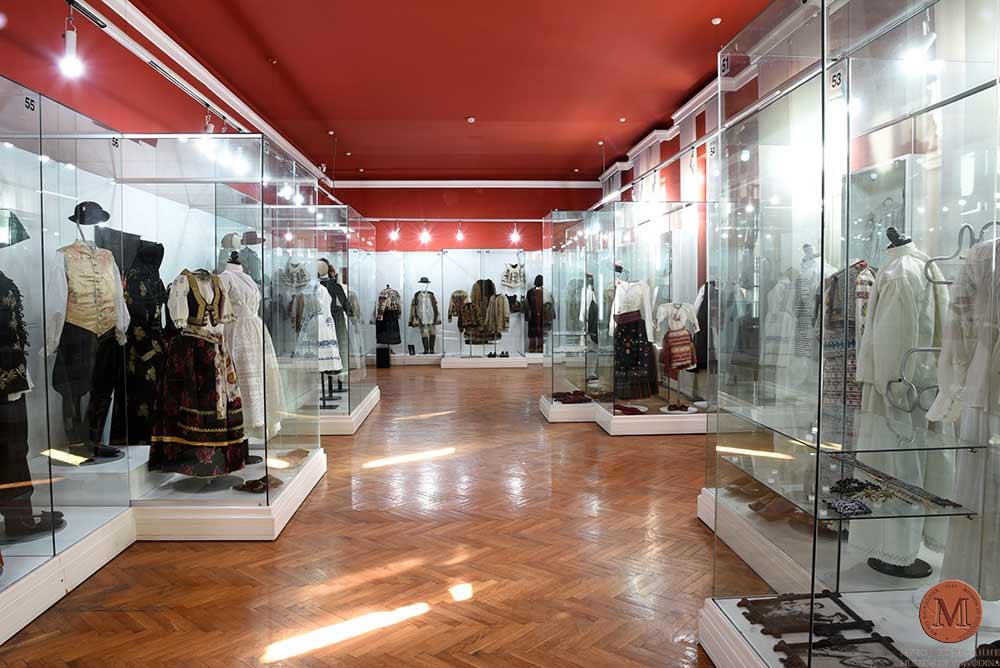 The scope of spiritual and social life of the inhabitants of Vojvodina is presented by the cycle of family customs – wedding, birth, childhood and death. On exhibit there are wedding rods, best men’s towels, a wooden flask, a cradle with its bedding, children’s toys, coffin sheet, towel for the cross, a bouquet of basil and other objects.

The folk costumes that are on permanent display have been grouped according to a typology which developed due to varied cultural and historical influences and the climate of the Pannonian plain. The basic type of costume in Vojvodina is the so-called Pannonian, which is characterized by broad clothes of white linen, flax or cotton cloth.

Onto this type of clothing are added Carpathian and steppe influences in the form of rolled wool and fur clothes. The central European type of costume came to Vojvodina as the result of resettling of populations from various regions of central Europe. They brought industrial fabrics and new cuts to clothes.

“Memories of the old century” is the motto of the segment of the permanent exhibition which presents the costumes of the population resettled after the First and Second World War.