Historical time begins with information on the multiethnic development of Vojvodina.

From the Battle of Kosovo the migration of the Serbian population began from regions south of the Sava and Danube rivers to regions to the north, and it was continued in even larger proportions with the decline of Hungary in the mid 16th century. In this way the Slavic population, which had lived throughout Hungary after the Great Migration, first at the time of Stefan Lazarević and Đurađ Branković, and then at the time of the Hungarian-Turkish wars and Srem despots, as well as under the Turks in the 16th and 17th century was joined in great masses by the Serbian population of the Balkans, whereby Srem, Bačka and Banat, Pomorišje and Baranja became new Serbian lands. Into their new settlements the Serbs transferred their traditions, culture and beliefs. Patrons from the families of the Serbian despots built magnificent monasteries on the slopes of the Fruška gora hills in the 15th to the 17th centuries. The permanent exhibition depicts this period with copies of frescoes of St. Sava, Despot Stefan Lazarević, Maksim Branković, photolithographies of the Miroslav Gospel from 1897, as well as the Four Gospels of Archbishop Maksim Branković from the 16th century. 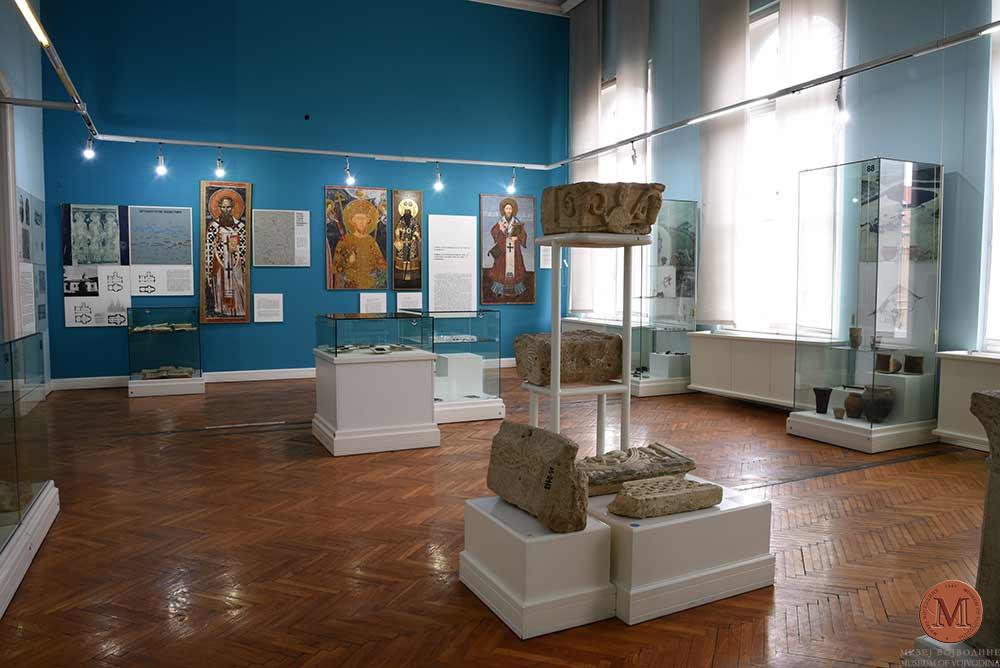 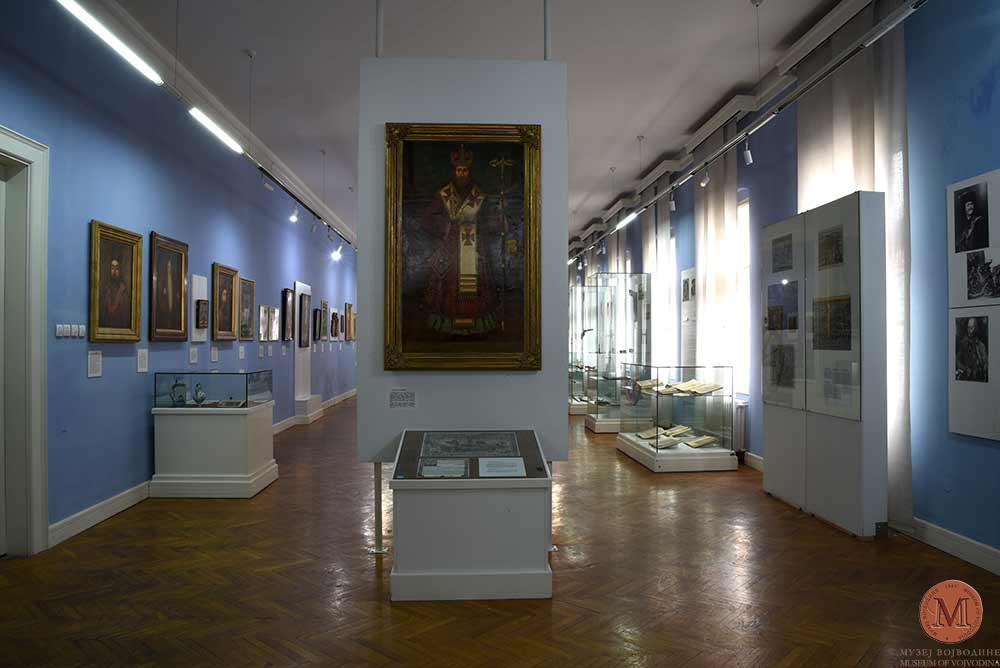 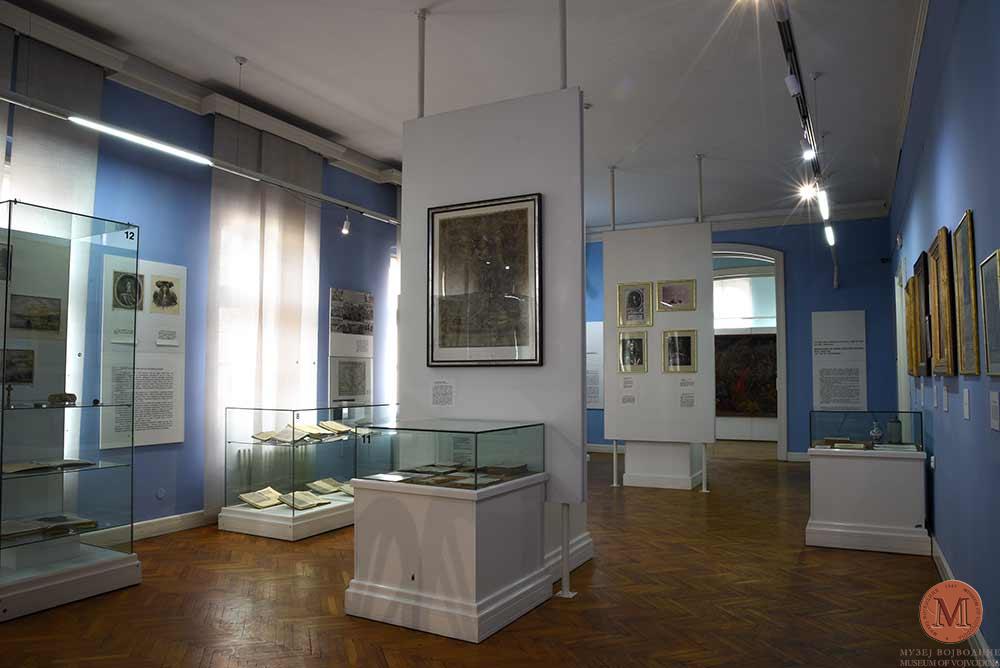 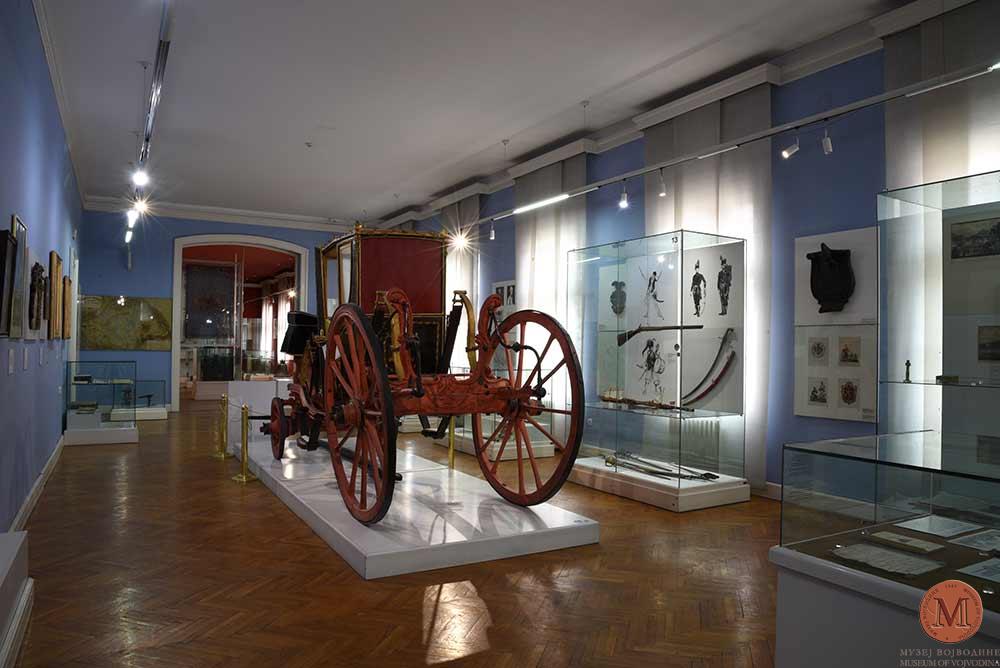 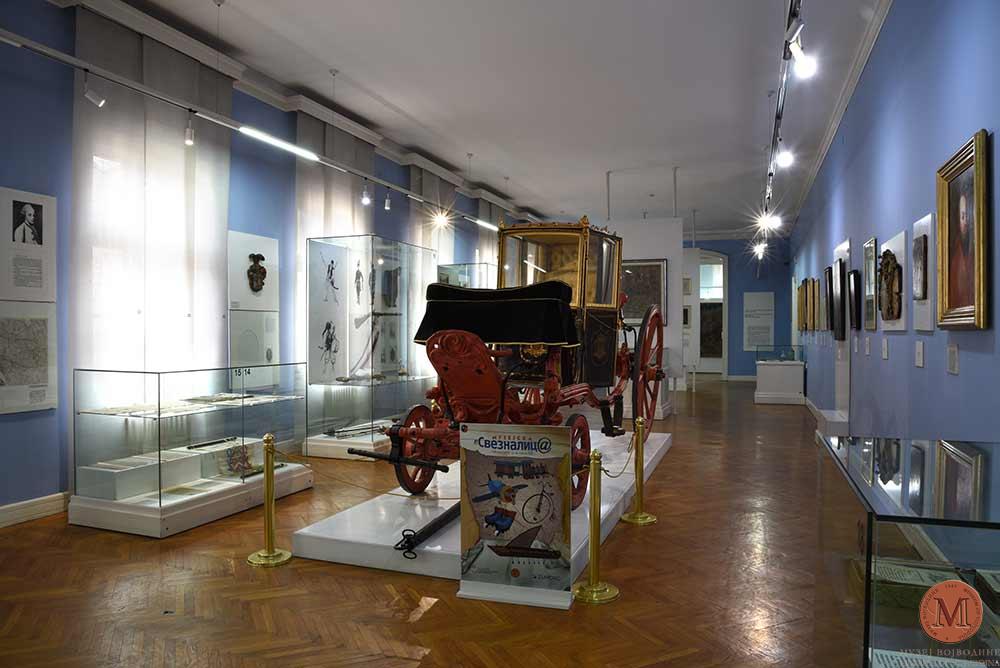 The Austro-Turkish wars, led in this region from 1683 to 1739, caused great migrations and significantly changed the administrative and military border between Austria and Turkey. In this period the Great Migration of the Serbs took place in 1690 led by Patriarch Arsenije Čarnojević, shen Serbs moved to the Bačka, Banat, Srem districts and areas all the way to Buda and Komoran. For their services in the war against the Turks and the defence of the southern border of the Monarchy, The Royal Court in Vienna, starting from 1690, gave the Serbian people a series of privileges which concerned cultural and educatinal, and above all their religious autonomy. These events are illustrated by engravings of victorious battles against the Turks: near Slankamen in 1691, Senta 1697, Petrovaradin and Timisoara in 1716, along with portraits and personal belongings of important people of this period in Serbian history and engravings of privileges issued by the Austrian Emperor Leopold I, Charles VI and the Empress Maria Therese.

As part of the subject of migration and resettlement there is a depiction of the planned resettlement of Germans, Hungarians, Slovaks, Rumanians and Ruthenians in the 18th century. At that time the territory of present day Vojvodina was divided into separate administrative regions, politically and economically: the Military Border which was formed in 1702 and the diocese districts under civil rule. The growth of the population led to the growth of the economy, handicrafts and trade, along with the growth of towns as can be seen from urban items, objects from handicraft workshops, guild letters, seals, banners of handicraft associations, coats of arms and engravings of towns and cities.

Multiethnicity also implied the presence of many confessions. The spiritual life in this region was under the auspices of the Orthodox and Catholic churches, but also under that of other religious communities (Jewish, Protestant, Greek Catholic). This is depicted by numerous exhibits: church vessels, priests habits, prayer books, portraits of church dignitaries, parts of the iconostases and engravings of the Fruška gora monsteries.

The political life of Vojvodina of the first half of the 19th century is marked by two important historical events. As an echo of the First Serbian Uprising, Tican’s Uprising broke out in the Srem district (1807) and the Krušica Uprising in the Banat district (1808). Under the effect of the revolutionary events in Europe 1848/9 the Serbian people began a struggle for territorial and political autonomy, which led to the creation of separate crown regions: the Duchy of Serbia and the Tamiš Banat (1849-1860). These events are represented by the portraits of noted participants, engravings of important events and battles, archive material and weapons from that period. 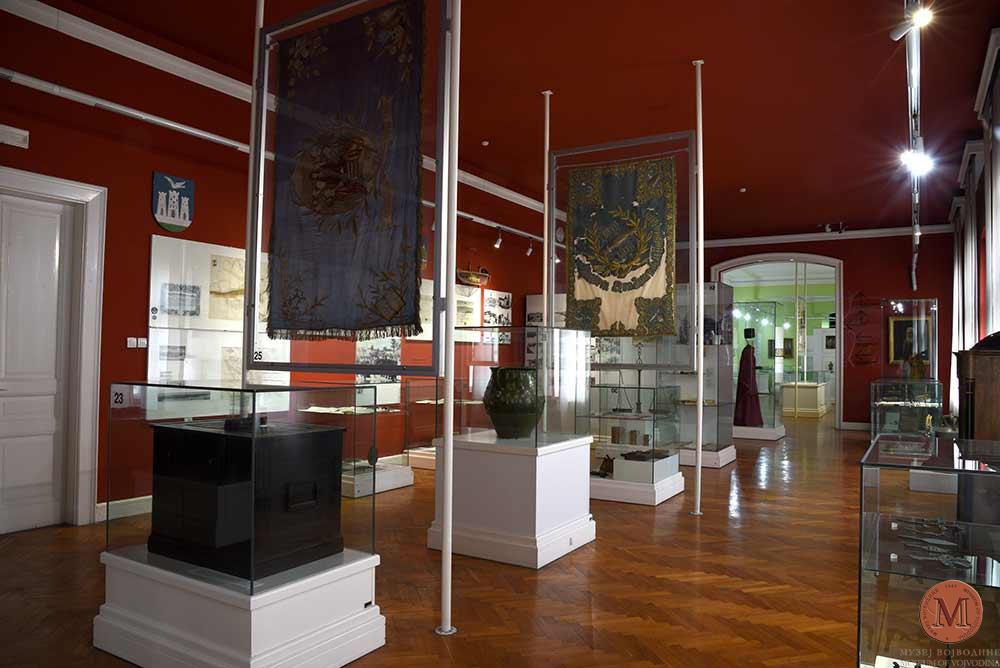 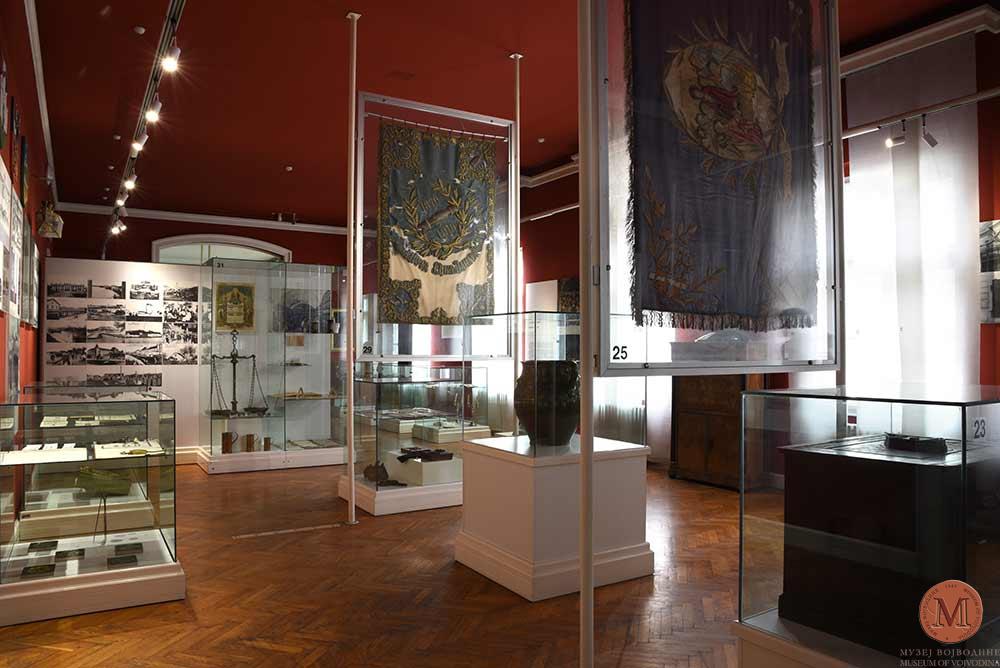 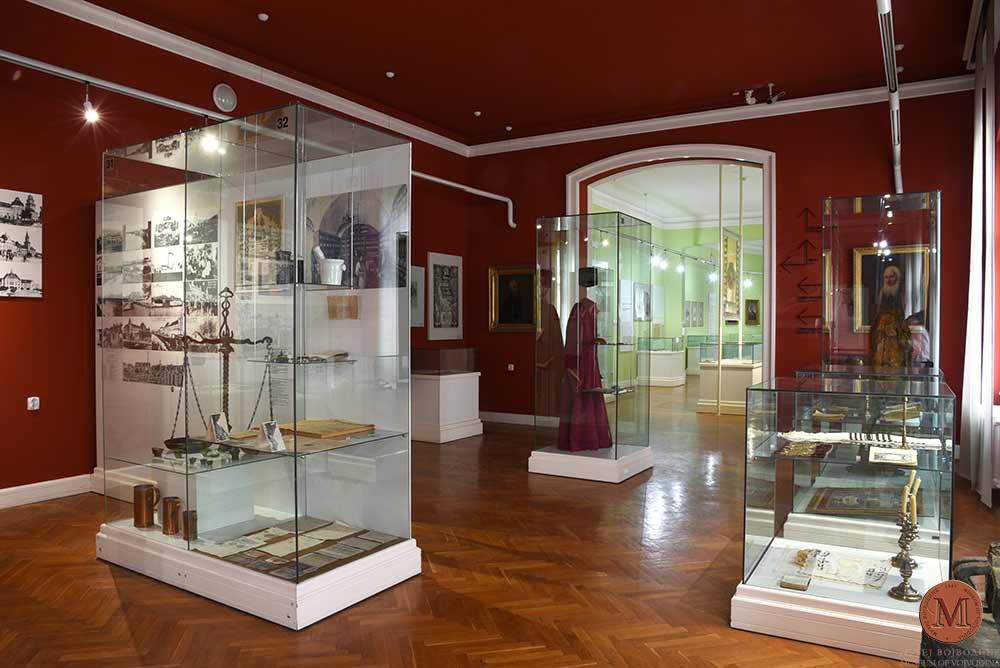 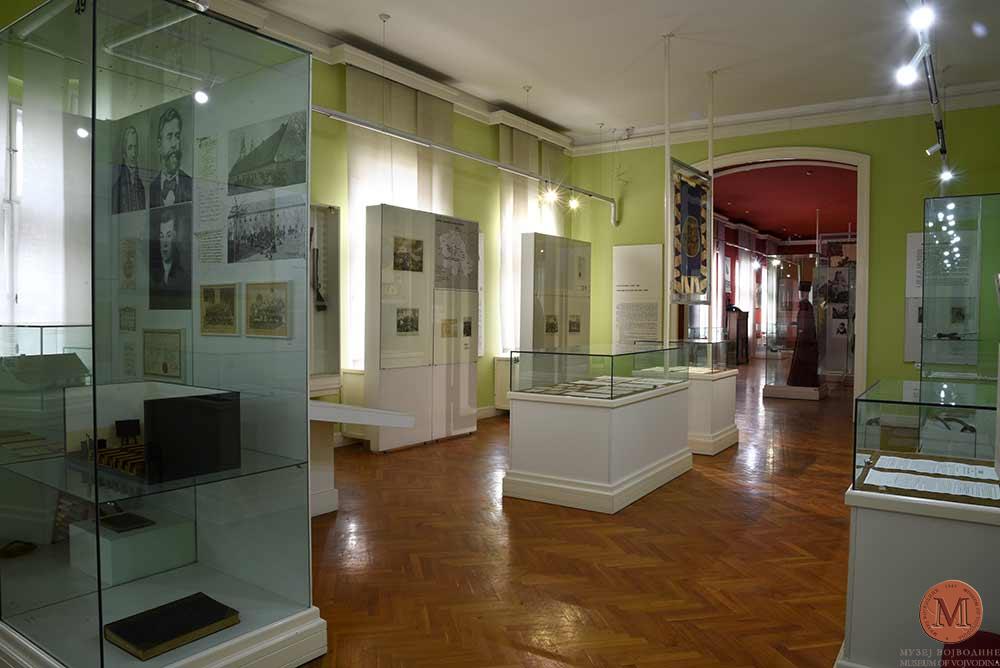 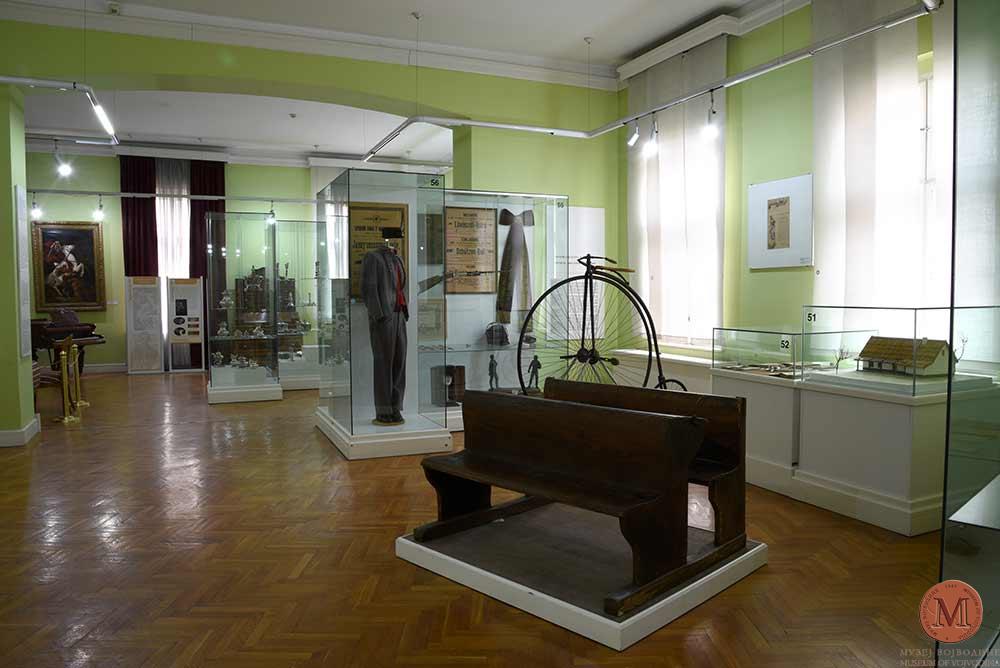 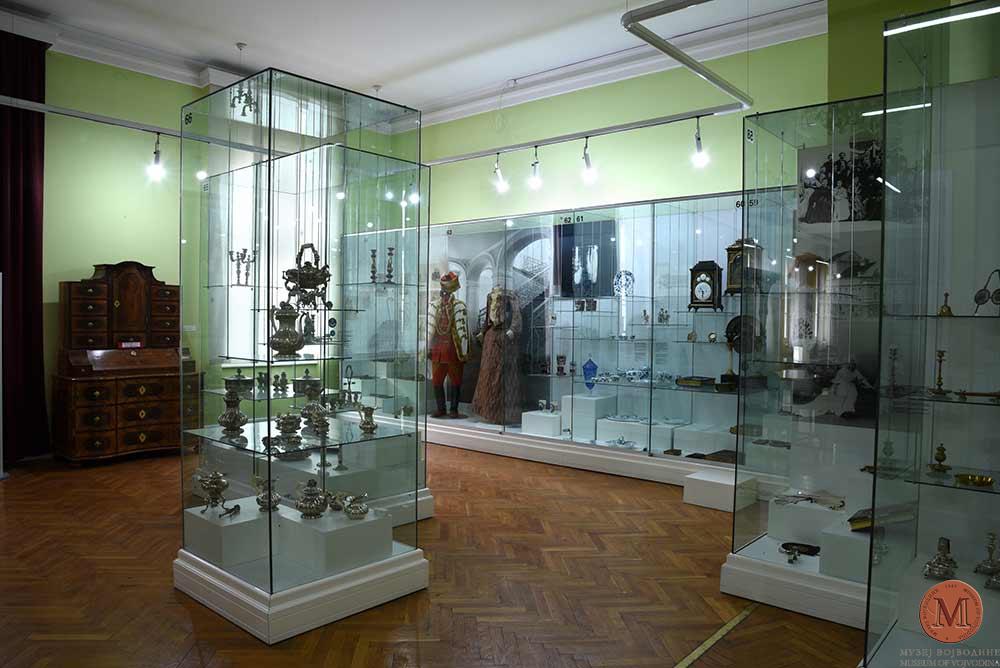 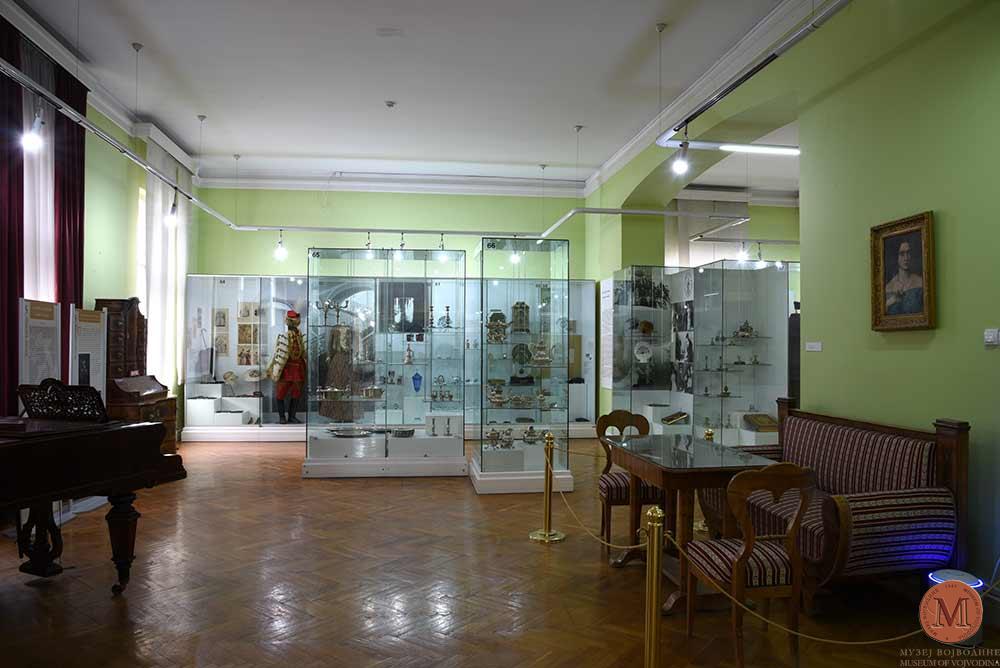 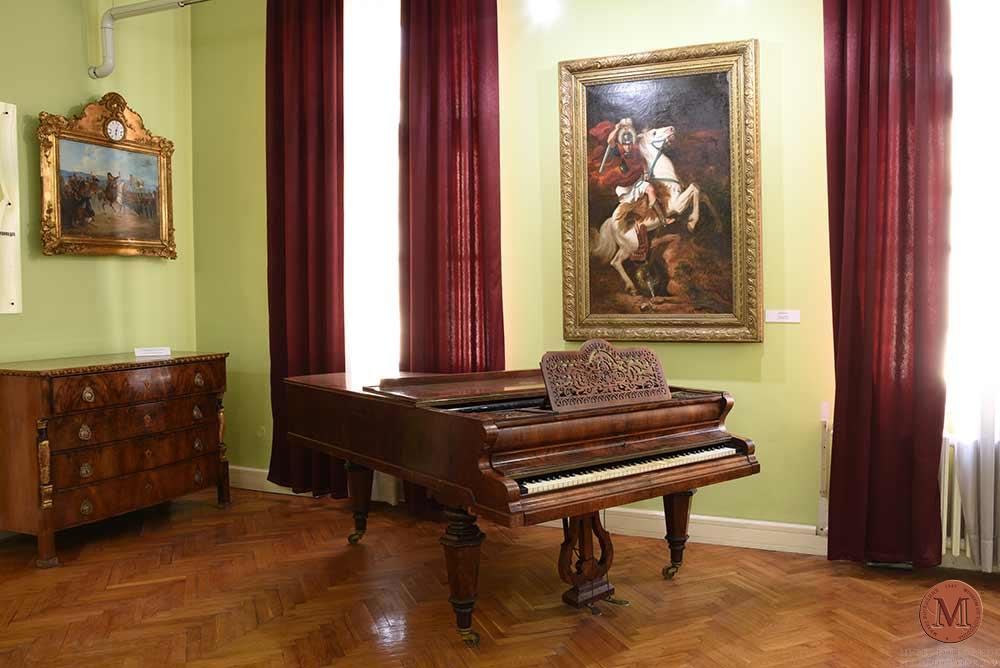 The economic and political events of the 18th and 19th centuries shaped the cultural and educational development of Serbs in these regions. In the late 18th and especially during the 19th centuries the Serbs had significant achievements in these fields. First among the southern Slavs they founded their national newspapers and founded their Matica Srpska Arts and Culture Society in 1826, published the Matica Srpska Annual Review, opened two grammar schools (in Karlovac in 1791 and in Novi Sad in 1810), teachers’ training schools in Szent Andrea (1812) and in Sombor (1816) and two seminaries. They printed a large number of books and textbooks. This aspect of the cultural life is illustrated by items connected with the founding and activity of the Matica Srpska Arts and Culture Society (founding charter, portraits of the founders and the first issues of the Annual Review), the growth of schools (the first readers and teaching aids from the 19th century), the printing of the first books (The History of the Slavic Peoples by Jovan Rajić from 1794/5, and the Stematographia by Hristifor Žefarović from 1741). The social events took place in literarz clubs, school and singing societies and theatre companies which were established in larger villages and towns in Vojvodina. This is illustrated by items from theatre events, invitations and programmes of various lectures and fetes.

The forming of a civil society and the western European influences on the way of life, dress and habitation are respresented by items of town clothing, furniture in the characteristic styles (Baroque, Biedermeier, Second Rococo), watches, glass and porcelain from the 18th and 19th centuries. The collection of silver, from the legacy of Patriarch Rajačić from the 19th century is the largest collection of Viennese silver in Vojvodina.

At that time various sports disciplines were also developing – marksmanship, fencing, swimming, bicycling. The exhibition displays some rare objects (a bicycle from 1880, a marksman banner and target from the 19th century, Laza Kostić’s stop-watch, medals).