The Work of the Museum of Vojvodina

The journal “Work of Vojvodina’s Museums” was started by The Vojvodina’s Museum from Novi Sad in 1952 as a major and permanent imprint which publishes the results of activities of museum workers and institutions in Vojvodina as well as their scientific work. The main area of research is the cultural history of Vojvodina in the past and the present, observed from the viewpoints of related scientific disciplines.

In the preface to the first edition of the journal the overall purpose of museology and main goals for launching the journal were highlighted:

The journal should be the reflection of all our intellectual efforts and systematic work, which would in turn result in a proper understanding of our opulent past. Work of the Museum of Vojvodina is a periodical journal in which articles are published on a continuous basis, and which has a methodically-organised museum material related to archeology, history, ethnology, art history and natural sciences, in addition to papers concerning museum conservation issues of Vojvodina. Moreover, articles addressing educational problems which are met in the work of our museums will find their place in the Journal. This issues are being collected in the first place through contacts and mutual activities realized with people that organize thematic exhibitions, give lectures, etc., and whose surveys will provide support and help in teaching at schools. Finally, the problems of raising the overall level of expertise and knowledge of museum employees (scientific as well as administrative staff) will also be addressed through the organization of specialised courses, seminars and the like.

There had been fifty numbers published in a total of thirty-nine volumes up to year 2008. The first Editorial Board (Rajko L. Veselinović, Rajko Nikolić, Rastko Rašajski and Mirko Šulman, Ph.D.) determined the layout of the journal and, with the very first number, gave the basic concept of its contents: Preface, Articles and Treatises, Reports, Records and Documents, From the History and Development of Vojvodina’s Museums, Museum Staff, The Protection of Cultural Heritage in Vojvodina, Reviews and Surveys, Bibliography. In subsequent issues new sections were introduced: Obituary, Exchange of Publications, Thematic Exhibitions, Museum Collections, Museum Chronicles and Museum Acquisitions. The Journal also published the surveys concerning the protection of cultural monuments, because at one time Heritage Protection Service was part of the Museum. The tenth issue brought a new section – Directory– in which the bibliography of articles printed in the first ten volumes was enlisted. The custom of publishing bibliography of all the articles printed in the course of ten issues continued with every tenth number.

Conceived as a regular annual publication, the journal has undergone numerous critical phases, which are often caused by the lack of permanent funding, however the lack of appropriate scientific and professional contributions is sometimes the case.

The Issue No. 26 saw significant changes in the structure of Work of Vojvodina’s Museums. Instead of grouping texts into afore-mentioned sections, at the request of archaeologists, the journal was divided into sections according to different disciplines. It was believed that such aggroupment of papers would, at least temporarily, satisfy the need for a specific archaeological journal. The request initiated predominantly from the requirements of the publication exchange process with specialized archaeological institutions.

Up to the issue No. 25 the title text of the imprint was translated into French, and from No. 26 it is translated into English, since most of the abstracts are in English. In the issue No. 27 the title text remained in English, but abstracts were given in German, and starting from issue No. 28 titles in the contents are given (for every paper) in three languages (Serbo-Croatian, English and German). If the text is written in some other language, then the first translation of the title is given in Serbo-Croatian.

Special attention is paid to reviewers and their significance. It was decided that the names of reviewers should be mentioned after each group of articles from a certain scientific discipline.

Due to the problems of a financial nature Editorial Board decided to give priority in publication to papers of museum workers, since “Work of Vojvodina’s Museums” is the sole national yearbook in the field of museology. Certain impoverishment of topics from general and cultural history of Vojvodina was the consequence of this policy.

Due to the lack of funding and the low response from museum staff, the yearbook covered two years twice, and at one time the journal appeared as a double issue: 31 (1988-89), 32 (1989-90), 37/38 (1995-96). In No. 31 (1988-89), for the first and only time, in addition to the number YU-ISSN, the UDC number was introduced for the entire journal while the program orientation remained unchanged. Starting with No. 32 contents page was transferred to the beginning of the journal and the design and print quality of the journal were modified. The Editorial Board managed to maintain the regularity of publication of several issues (No. 33-35) with the same concept as before. 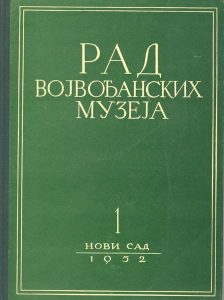 By merging of Vojvodina’s Museum with the Historical Museum on May 20, 1992. the Museum of Vojvodina was created.

A new Editorial Board was appointed and the name of the journal was changed to “Work of the Museum of Vojvodina”, but the concept and decision to continue to publish articles of collaborators from other institutions remained. Starting from No. 36 the journal bore a new name, as well as a new cover design, whose layout was entirely done electronically.

In the double issue 37/38 and 39 (1997) there were printed papers from two scientific conferences organized by the Museum of Vojvodina: Medieval and Slavic Archeology in Vojvodina and the Serb Uprising in Banat in 1594, which had as a consequence the increased volume of these two issues. Changes in the concept design were introduced with new sections Pedagogy and Conservation & Restoration. In No. 39 (1997) the new emblem of the Museum of Vojvodina was printed for the first time and which was created to celebrate the 150th anniversary of the establishment of the first concept of Museum. Years 1999-2000 were commemmorated with a double issue 41 /42. To compensate for the delay in publication of the journal, in 2004 a triple issue 43-45 for years 2001-2003 was published.

The journal kept its earlier concept and existing sections, but got a new cover design and new logo of the Museum of Vojvodina, starting with No. 46 (2004). 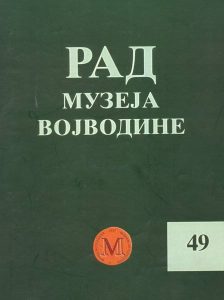 In Issue No. 50, a great number of scientific fields were covered – archeology, anthropology, history, art history, ethnology, conservation, museology, museum pedagogy, cultural management and library science. Besides scholarly papers, a number of articles of a more popular nature were also present within sections Records & Documents, From the Museum and Gallery Collections, From the Museums and Galleries of Vojvodina, Bibliography, etc.

On the authorized list of scientific journals for year 2013, published by the Scientific Board on History, Archeology and Ethnology within the Ministry of Science and Technology Development, Work of the Museum of Vojvodina was categorised as journal of national significance (M52).
(Drаgicа Јоvаnоvić/ Lidiја Мustеdаnаgić, M.A.)

We invite all collaborators of the journal Work of The Museum of Vojvodina to send their contributions for the next number, No. 55, by the end of April 2013 to the address of the Museum of Vojvodina – 35, Dunavska St., Novi Sad (both paper version and on CD-ROM). On the envelope should be indicated as receiver EDITORIAL STAFF OF WORK OF MV. For further information, please contact Darijuš Samii, the Editorial Staff Secretary, via e-mail: dsamii@yahoo.com. 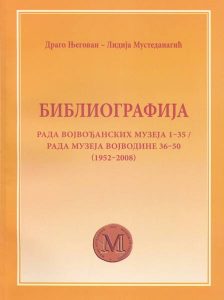 „I would like to begin this speech with an opinion expressed by Aleksandra Vraneš about the significance of bibliographies. She says:’The integration of all types of bibliographies, and particularly the national ones, both current and retrospective, into a country’s comprehensive scientific system and into the everyday life, ensures that a nation’s identity be proved in practice. Therefore, Serbian current bibliography is a responsibility and duty of us all’. She proceeds to quote Ljudmila Viktorovna Ashatova’s words saying that the bibliography is a bridge that ‘links the quanta of knowledge with the objective world’.
There are tendencies suggesting that bibliographic literacy should be viewed as the part of an educated individual’s general literacy, or, in order words, the standards of contemporary bibliography information should be regarded as the part of literacy in a broader sense, even though experts, especially bibliographers never insist on the bibliography culture as the part of the culture of writing. In compliance with such a tendency accompanied by due scientific curiosity and experience, Drago Njegovan and myself started creating this bibliography which is now in front of us. Dr. Drago Njegovan have already had an enviable experience as a bibliographer (he published the Bibliography of archpriest Stevan Mihaldžić, the Bibliography of the Matica Srpska Proceedings for Social Science and the Bibliography of NDH Periodicals), he worked on the Serbian Biography Dictionary, Novi Sad Encyclopaedia, while I was gaining experience by working on the first three volumes of the Serbian Biography Dictionary and the 5th volume of the Writers’ Lexicon which is yet unpublished by Matica Srpska.
While working on the “Bibliography of the work of Vojvodina’s Museums'”, or on the “Work of the Museum of Vojvodina”, we had on our mind not only our several-year- long work experience on our journal – Drago Njegovan as author, reviewer and member on the Editorial Board, myself as author, reviewer and proof reader – but some good examples as well, like the first bibliography published following the 10 issues of “Work of Vojvodina’s Museums”, as a result of the effort of five experts from the Museum: Mila Bosić, Mirjana Manojlović, Živan Kumanov, Vera Jovanović-Dunđin and Vera Milutinović. Their bibliography was inspiring in terms of how to put the entries, how to organize the columns, arrange texts or create the layout of the publication, by dividing it into two parts – contents according to professions and contents according to authors.
As for the layout of the bibliography, I should mention that we followed the layout of our journal meticulously – its size, fonts, the Cirillic letters and even the book cover design of a particular issue number which came out in orange colour – issue No. 32. In comparison to several shades of green which prevail in our Journal, it was an exception, abandoned unfortunately once and for good. We liked it and the message of our choice may be that an exception could become a rule or that new rules could be established, therefore the 100th issue of the Bibliography should look like this. The message could as well be that the destiny of a journal may resemble a living organism which is prone to all kinds of influences. We might just as well simply give advantage to warm colours instead of cold ones.
The very fact that we are employed with the Museum of Vojvodina, our commitment and especially our experience in writing a museum journal, its rich tradition and a great number of eminent experts from various fields, or all together, have obliged us to complete such a big and not at all easy task by which we wanted to pay respect to our forerunners from whom we have learnt much, giving at the same time our contribution to the tradition we started from. Experience is not what is happening to us, as George Orwell says, but experience is what we do with the things that happen to us”.